Well, I’d like to write it in English today. Because the performance of NEWS, "Japanese Male Idol",  in SONGS OF TOKYO, NHK World, were so amazing today and after that they sang, I heard their two fans from oversea said ‘I wanna take Massu’ and ‘I have Tegoshi if you have Massu.’ ....  ‘Hey guys. I gonna take Shige!! ’ , I spoke to TV and found that there’s no border to love NEWS and their music. So I’ll be so happy to tell about NEWS since I believe they deserve global recognition.

At first of all, I’d like to tell about their information, the history and the member then let me tell you how NEWS are so great.

When their first CD single 'NEWS Nippon' was unvailed in 2003, NEWS was of nine members. Actually it’s a well-known fact that TAKA, the frontman of the famous rock band, ONE OK ROCK, was in very early NEWS. Gradually some of the members had left NEWS and now the group consists of these four members eventually since 2011.

Kei-chan is a leader of NEWS. He’s diligent. He’s naturally considerate of other person’s feelings, and it helps his work and NEWS a lot. He loves NEWS and the members.

His gifted sharply figure is so attractive when he dances. Also his good at showing his expression with lyrics gives the NEWS songs depth.

He also has talents to communicate with people by his trained skill and his nature. You can imagine this sexy Kei-chan was a reporter the US presidential election, can’t you?

Shige is a singer, a songwriter, an actor and a novelist. His first novel ‘Pink and Gray’ was published in 2012 and then other several books were published so far. It’s not ‘a pop group member tried to write a kind of novel’. He is now one of the most important Japanese young writers.

His attitudes to cultures or the world movements on the whole are so sincere. For example, the theme of his solo-song ‘Ayame’ written by himself is coexistence. Besides, he cooks well, even to make UMEBOSHI, a Japanese traditional food young people rarely make in these days. Let me say that Shige is a ‘Modern Japanese Leonardo da Vinci’. No exaggeration.

Massu’s smile always makes you happy. His song is healing and ever-changing. He sings gentle as his touching angel’s wings and sharp as his chasing prey. His voice is heeling, lyrical and strong. He often raps and it is so great so that his Hip Hop sense makes something for NEWS.

He designs all of the costumes for NEWS. The costumes that make use of the individuality of each member are highly evaluated.  Their clothing by Massu is also the big part of NEWS as well as their songs and dance.

His song is a full of energy, power, passion and love. Once you listen his singing, you might be overwhelmed. Tegoshi is a charismatic person.

Besides, he cherishs the fans so much. He often calls concert a dating with NEWS and fans are ‘Kittens’ and ‘Honey’. You’ll know it’s not a joke when you come to the concert and see Yuya’s happily smiling face. He’s such a fine guy, positive and charming. A lot of his experiences with the TV program shootings in abroad have a good influence on him. It is sure that you’ll be his (their) Honey and Kittens soon after you know Tego-chan.

Roughly information is ready. So let's back to today's program and think why so attractive they are.

The latest single of NEWS. Their clothing, including black leather heels by Christian Louboutin are impressive. This pop song with dancing shows their sophisticated ways. You see Kei-chan’s slim, supple body moves so smoothly and Shige’s beauty inside out was persuasive. Tego-chan was so cute as always and Massu rap brings Hip-Hop. Thier beautiful figures and voices come so fast jusy like 'Top Gun'.

One of the cutest song from latest album ‘WORLDISTA’. NEWS in the 8-bit computer game and try to catch something as if they were like Mario bros. Such prettiness they were. Imaginary world as NEWS perform is always great. Kei-chan was throwing kiss to Shige, I know.

A lot of countries name appeared since this song is for 2014 FIFA World Cup.

Having the feeling of moving fast, this song is the other aspect of NEWS for achievement. They have many cheering song and this ONE is one of representative works. Their different personality and voices come to make beautiful harmony when they sing together. That's NEWS.

It’s also such a cheerful song with a full of happiness to ‘take me high’ and ‘go to the top ‘ as in the lyrics. In SONGS OF TOKYO, people show up on the stage and sing together with NEWS. I got to know that we can connect through music without languages. The songs of NEWS have such a power. Tego-chan was soul-stirring in it.

The four people are so good to involve people to have fun with their performance. You looked how the people were smiling happily on the stage with this SEVEN COLORS.

Mr. Block who is the finalist guy from X-Factor, seems not knows so much about NEWS and their performance but even so he picked Massu without hesitation to say he wanted to join the love with Massu, either digital or real…. So, the performance can pass something powerful to a person even at the first sight. So as want to be falling in love with them. I knew, I did it !

You could know how their connection is and their affection each other while looking at them. They have been raising up all together for more than 15 years and still good relation as brother or childhood friend, having respects each other. So that’s why their songs are so moving. If you want to see Love, Peace or Happiness, you hear their songs. NEWS has it all.

Again, their songs are amazing and I’d love to hear they’re singing more and want more people to know about them. Would be so happy if someone in the world meets NEWS and comes to falling love with them and their songs. 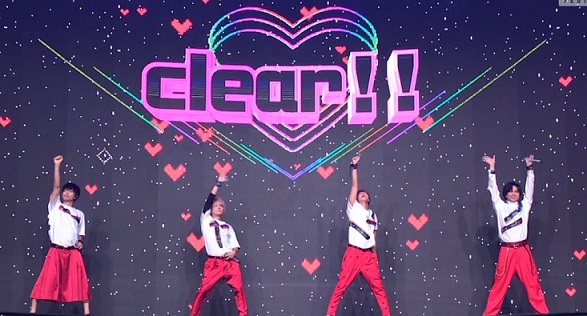